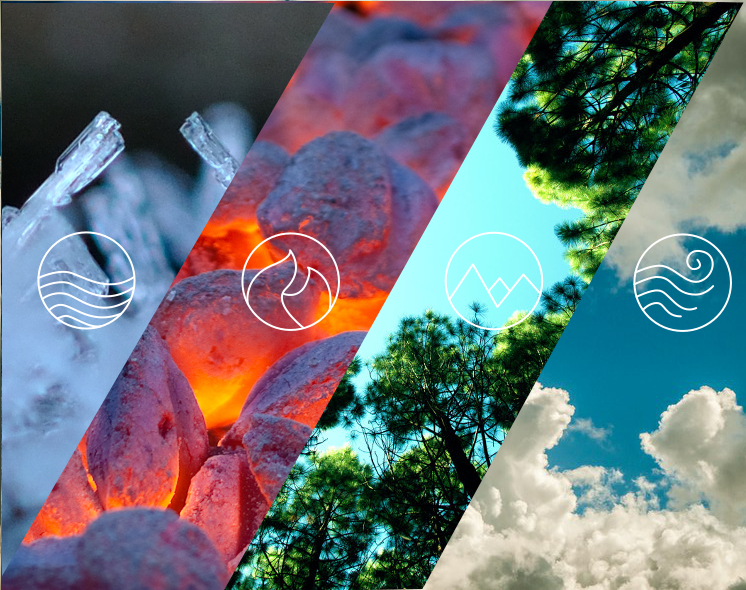 The Meaning of the Elements within a Birth Chart: Air, Earth, Fire, Water

You may have noticed when creating your astrology natal chart that you may see a special feature such as "The Air element is dominant among the inner planets".

What does this mean?

All the signs in Astrology have unique characteristics but they are connected to one another in an interesting way. They are split into 4 groups, and all belong to one of the 4 elements: fire, air, earth, water. The elements describe abstract states of matter, not too different from the states of matter in chemistry: solid, liquid, gas and plasma.

What is the symbolism of the elements within astrology?

In astrology, each of the elements is defined through the human personality and has parallel characteristics to the element in nature.

Here is a description of the elements:

There is another layer to the story. Not only do three signs all share an element together, but each one is thought to reflect a different variation of the element, or a particular state.

This is where modes come into play. There are three modes: Cardinal, Fixed, and Mutable. The planets are split into 3 groups where 4 planets each belong to a mode. We won't delve into modes in this article (read about the meaning of the modes in astrology here, but each group helps describe the 'variation' of the element the sign takes on.

Here are how the signs each express their individual element:

Aries represents the spark, small fiery particle or young flame being born out of nothing. It represents the birth of a new fire. Leo represents a mature, well fueled fire. It is reflected by the power of a full flame. Sagittarius is symbolized by the twinkling embers of a fire, sparkling quietly on their own. It also be represented by glowing lava.

Capricorn is reflection in the principle of contraction and crystallization which hardens matter into rock and gemstones. It is additionally often associated with mountains and rock faces. Virgo is reflected by a living forest, morphing and changing. It is intricate in nature, private and secluded. Taurus is symbolized by the wealth stored in the land and rich potential of fresh soil or earth. This is the age old symbol of fertility and abundance. It is often symbolized as a garden or pasture, especially the type a bull rests on.

Libra is represented by a fresh, young movement of air such as the breeze or wind. Gemini is symbolized by quickly moving air, with a volatile, spontaneous feel. It can also be represented by rapidly morphing clouds. Aquarius is reflected by still air, such as that which predominates in space. It can also be seen as the quality of electricity, an intangible current, a carefully controlled and contained flow of energy, and yet at its basis composed of erratically moving particles.

Cancer is symbolized by moving water in a stream, river or waterfall. The energy is of water moving, initiating a new path through the land. Scorpio is represented by the ice, frozen and unmoving. Additionally, its association with 'depth' can be akin to ground water, or pure and refreshing well water. Pisces is symbolized by the ocean, reflected by its vast, softly morphing, yet powerful nature.

What does it mean if a chart is lacking in an element?

If a chart is lacking in an element, it is often thought that it reflects a deficiency. The individual feels inspired to compensate for the lacking element and they are often unaware of their striving to overcome it. Initially, their attempts to overcome the deficiency may appear as the element is strong in their chart. However, they may express it in an unnatural manner.

The key is to find balance with the missing element. Each one of us is familiar with the elements and can relate to them in some way - they are all a part of us. Finding a soft, gentle approach to balance one's own chart is key.

These are the potential challenges of weak or missing element in a chart:


Which do you have? Find out by calculating your astrology birth chart here.

Why is element dominance measured within the "inner planets"?

You may notice that only the inner planets are examined when determining if an element is lacking, dominant, or if all the elements are balanced. This is simply because the inner planets (Sun, Moon, Venus, Mars, Mercury and Jupiter) describe the individual personality the best, while the outer planets describe generational qualities more.