The Meaning of MC in Libra

As a sign, Libra is represented by the scales, reflecting its desire to find composure and balance in all things. In turn, the quality of this sign is harmonious, seeking to be on the same wavelength as others. You can find out about symbolism and energy of the sign Libra in depth here.

What is the MC in astrology?

The MC, also known as the Midheaven, is a point on the astrological birth chart. Similar to a planet, it falls into one of the 12 signs (the zodiac). To find out exactly which sign your MC falls into, create your birth chart here.

The MC has a special meaning in the astrological chart, as it represents an individuals striving. In particular, it reflects what a person wants to achieve through their career or vocation. It literally is often oriented toward the top of one's chart in the way it is drawn as well.

A career often means more to a person than simply a job. It is one's calling, one's livelihood. Of course, the idea that we need to know our calling early on in life confuses and frustrates many people. It's normal to not know exactly what we want. But often we are drawn to certain things. Often we things that light our fire and simultaneously make use of our own unique talents and capabilities at the same time. 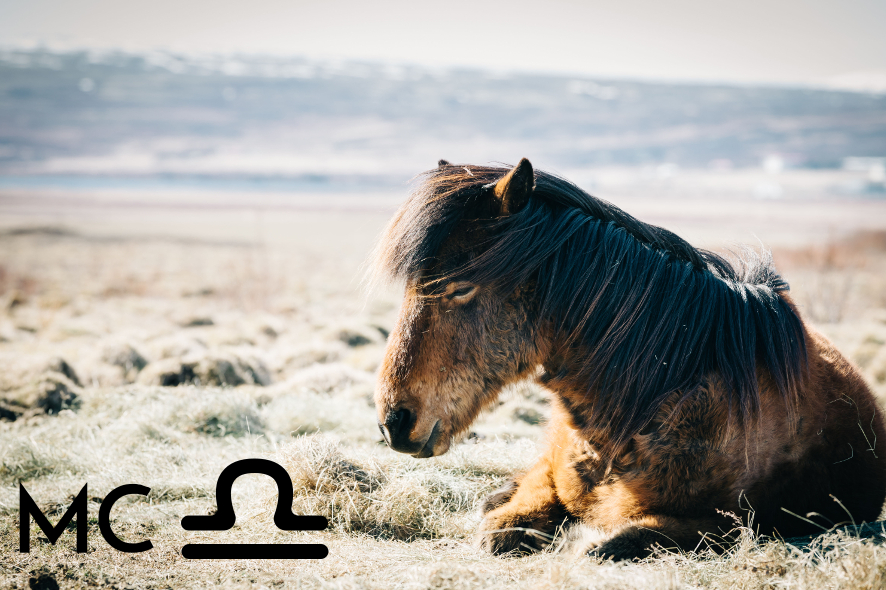 What is the meaning of the MC in Libra?

Balance means a constant state of recalibration. Libra inherently enjoys the process of finding balance again and again after being woken up by turmoil. In fact, ironically the Libra MC enjoys getting drawn into the most hectic of professions and has an uncanny ability to stay zen despite the chaos.

Libra is drawn to fields that rise above the pettiness of personal bias and prejudice. It seeks to see things from a higher ground, like a cloud floating up in the sky, unperturbed by the details of the happenings below.

Internally, Libra knows clearing one's own biases is a powerful process in life that in fact deeply benefits the self. As one sees things from other point of view, one begins to get clarity on the exact ideas that were blocking their own progess. And in turn, the ideas and things that are most core and most beneficial in a whole range of circumstances become apparent.

It's these things that unify all people. And in turn, its no surprise that Libra loves being a diplomat, through whatever form it takes. As a diplomat, Libra is stretched to represent and honor one point of view while warmly immersing oneself in other points of view. One acts as a bridge between cultures and modes of thought. One is uniquely positioned to see the commonalities between the two, and has an opportunity to bring deeper understanding between those different sides about the things that truly matter.

Libra is generally the sign of pacifism, meaning it strives to avoid conflict and rather settle it through peaceful means, even if it means occasionally exposing itself to the fire. In turn, MC in Libra thrives in the role of a meditator, though that very concept can take a host of different forms throughout different professions.

Underlying that is a drive to personally transcend the feeling of being a slave to external conflicts in the everyday world. Libra is constantly striving to find the fulcrum on the scales, the place where every party involved can be happy or at least feel some sense of justice.

Thus, it is no surprise that Libra is drawn to professions such as mediators, lawyers, or criminal enforcement.

Libra is often is an excellent listener and has the ability to speak well on behalf of others, as well as speak in a way others can understand and absorb. In fact, MC in Libra has a deep drive to thoroughly learn how speech and words affect the behaviors of others.

MC in Libra studies carefully the multifacted responses of others to words and phrases. He or she enjoys exploring ways to frame questions, to use their body language, or maneuver out of dead end conversations and evoke a particular response.

This tendency often results in the individual being a talented writer, poet, comedian, etc.

One with this placement often enjoys debate and exploration of others ideas. One often enjoys learning how to transcend the strong emotions of the experience and find a way to explore differences without triggering others.

Seeking to hear and learn from others

Communication is one's of MC in Libra's greatest tools for finding healing. Nothing brings more communion than the simple act of listening and allowing others space to be heard and loved in their unique expression.

MC in Libra is often drawn to professions that involve a great deal of collaboration, especially within creative work. Whether it be about being part of an artist's collective or a large band, MC in Libra is motivated to learn from others and be in a state of ongoing collaboration.

MC in Libra can also thrive in counseling. Finding balance requires patience and an ongoing willingness to return to one's center. Through this ongoing practice, Libra is a great teacher to others.

The core symbolism of MC in Libra can manifest in a multitude of different ways but centers around finding balance amid even chaotic situations. It centers around the concept of peace, amicability and harmony. Sometimes the path to that is more personal, and sometimes that can be explored among others in mediation or collaboration.

Additionally the energy of this placement indicates a strong desire to find harmony within one's career, and balance with other aspects of one's life.