William Michael "Billy" Zabka (born October 21, 1965) is an American actor, screenwriter, director and producer. Zabka is best known for his villain roles in several iconic 80s films, such as his role as Johnny Lawrence in 1984's The Karate Kid. In 2004, he was nominated for an Academy Award for co-writing and producing the film Most. 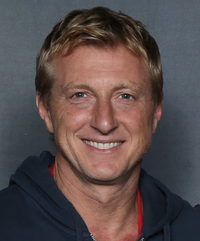 image credit
William Zabka by Supercon Conventions, is licensed under cc-by-2.0, resized from the original.