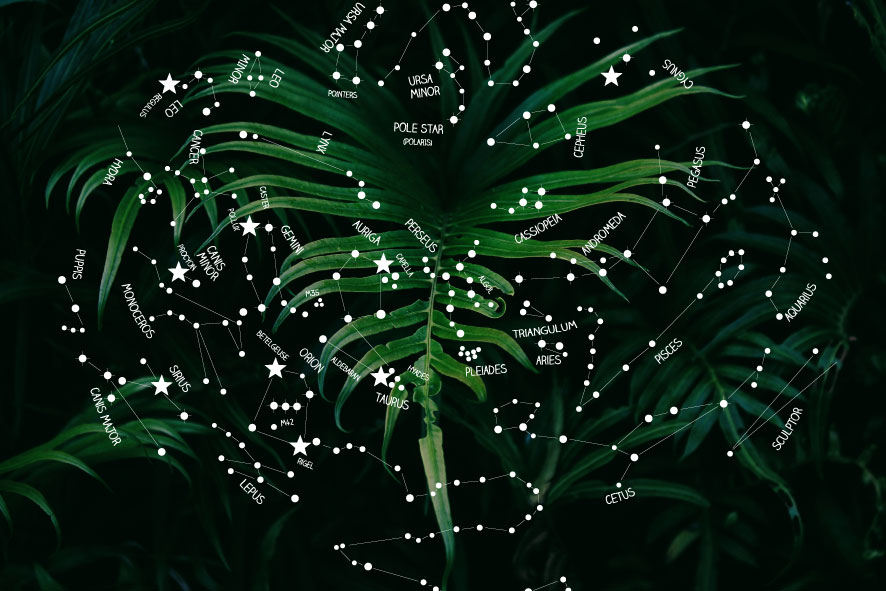 What?! Yes, it is a bit odd. From a broad perspective, the issue is that calculating actual star positions in the sky is not very easy. In the Neo-Babylonian period, around 700 B.C., when the first roots of modern astrology were sprouting - people did actually look to the sky to chart constellations and their positions. Likely, early people were very connected to the movements of the stars.

At 700 B.C., people did not even know the effect of the precession. What is that? Here's an image that demonstrates it perfectly: The earth's rotational axis itself is slowly changing.

By slow, we mean very slow. The full rotation of the axis of the earth itself takes 26,000 years. But astrology has been present for a very long time. It’s already been more than 2,000 years since the Babylonians defined some of the first constellations we still use today!

This means that the rotational axis of the earth has shifted today since astrology was first in use, and continued to be in use over the many centuries. The stars today are in a different position in the sky. They are not off by much though. It approximately 25 degrees back (so if your Sun is 22° Scorpio, the true position of your Sun was 27° Libra). Eventually, it will be a full sign back. The true position of the planets are effectively the Sidereal calculations.

Ok so star positions are slowly shifting - but why do we continue to antiquated positions?

So we know what Sidereal Chart calculations are now. They are the positions of your Sun, other planets, and asteroids in their true constellation regions in the sky. There is another school of thinking which defines modern astrology and bases the energy of the signs on "the time of year" rather than the positions of the stars. It's called Tropical rather than Sidereal.

In Tropical astrology, if you are born on the Vernal Equinox, you are a 0° Aries Sun. It's irrelevant what the constellation in the sky is. The "energy" of the that time of the year is Aries. What is the Vernal Equinox? It can occur as early as March 19th or as late as March 21st, and is the period of the year when the path of the Sun passes over the Earth's equator. Here is a visual representation.

Note that the Sun's path is brown in the image above, as it travels along the celestial plane or "ecliptic". Our Earth's equator is the equatorial plane. Note that around March 21st or at the Vernal equinox every year, the Sun's path cross the ecliptic and starts heading northward. It enters the Northern Hemisphere and peaks there at June 21st (the Summer Solstice) which is why summer occurs around June in the North. Visa versa in the Southern Hemisphere.

So, the Tropical system of astrology which is our default on this site and throughout most of Western Astrology, uses the Vernal Equinox and time of year to determine what is called the First Point of Aries. Back in Babylonian times, this used to really correspond with Aries. It no longer does. Due to the precession of the equinoxes, it is now in Pisces. By the year 2600 it will be in Aquarius.

In the Tropical system, all of the other signs are simply measured 30 degrees from the First Point of Aries, and thus the Tropical horoscope is formed.

How can I calculate Sidereal position on this site?

Maybe you would not like to use the Tropical chart calculations. I prefer tapping intuitively the energy of the signs and concluding what is right for you. I find resonance with the Tropical system and many do. But if you'd like to use Sidereal charts on our site now, its easy!

You don't need any special Sidereal chart calculator to see them. Simply create a birth chart and enter your date of birth and location. 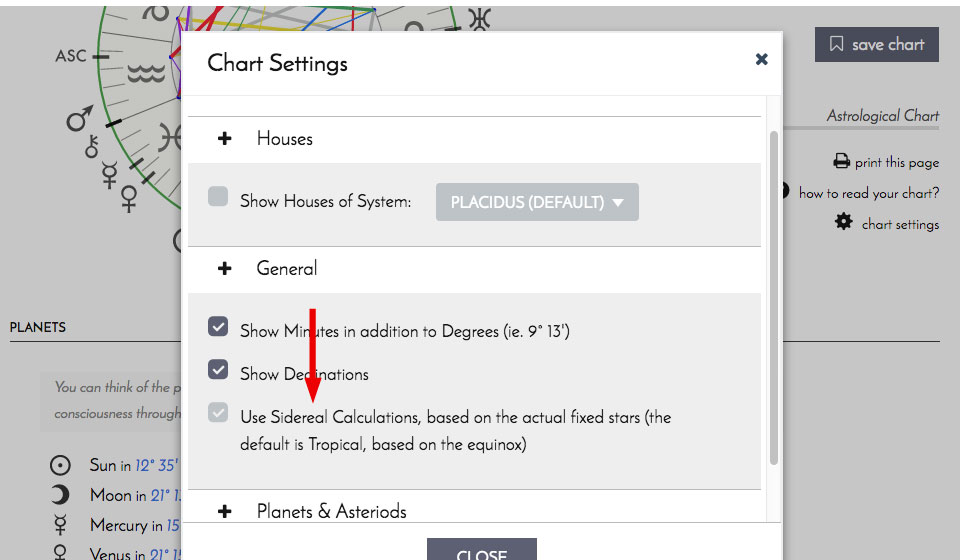 Open Chart Settings (to the right of the chart) and scroll down to check the "Use Sidereal Calculations" checkbox. Now your chart, planets, houses, aspects and patterns will transform to use new Sidereal positions.

Why should I opt to use Tropical Astrology over Sidereal?

Perhaps hearing that modern astrology is out of sync with real constellation positions may spur your interest in Sidereal calculations. It's interesting to note though that astrologers as early as the first century A.D. were opting for the Tropical system. Ptolemy noted this in his books. Many astrologers were also aware the constellations used did not perfectly cover their segements of the ecliptic, which were divided into 12 equal sized pieces.

There is magic to the mathematical nature of the number 12, its easy division into 4 elements (air, earth, fire and water) and 3 modes (cardinal, mutable, fixed). It's likely the evenness and ease of the system was favorable to the fixed star positions, which after all were difficult to calculate for Middle age astrologers.

However, it should be noted that in this modern day its easy for us to calculate this positions which opens up a whole new world of exploration and potential that we should take advantage of! :)