Edward Thomas "Tom" Hardy (born 15 September 1977) is an English actor. Some of his most notable film roles were in Star Trek: Nemesis, RocknRolla, Bronson, Warrior, Tinker Tailor Soldier Spy, This Means War, The Dark Knight Rises, and Inception, the critically acclaimed film for which he won the BAFTA Rising Star Award.His television roles include the BBC mini-series The Virgin Queen, ITV's Wuthering Heights, in which he played Heathcliff, Stuart: A Life Backwards, and Martina Cole's The Take. In 2012, he appeared as Bane in Christopher Nolan's film The Dark Knight Rises, and as Forrest Bondurant in John Hillcoat's crime thriller film Lawless. In 2014, he will star as Max Rockatansky in Mad Max: Fury Road, the fourth instalment of the Mad Max franchise. 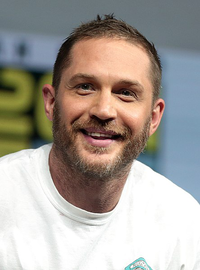 image credit
Tom Hardy by Gage Skidmore, is licensed under cc-by-sa-3.0, resized from the original.