Tigmanshu Dhulia (born 3 July 1967) is an Indian film director, actor, screenwriter, and casting director. Dil Se.., for which he wrote the screenplay, was the first Hindi movie to chart in the UK top ten. He is well known for his role as Ramadhir Singh in Anurag Kashyap's acclaimed modern cult film Gangs of Wasseypur. His directing career has also garnered him accolades with films like Paan Singh Tomar and Saheb Biwi Aur Gangster. Paan Singh Tomar eventually went on to win the National Film Award for Best Feature Film in 2012. Similarly, his sequel film Saheb, Biwi Aur Gangster Returns had gained critical acclaim. 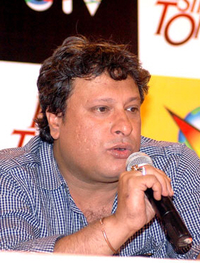 image credit
Tigmanshu Dhulia by http://www.bollywoodhungama.com, is licensed under cc-by-3.0, resized from the original.