Thomas Kretschmann (German pronunciation: [ˈtoːmas ˈkrɛʧman]; born 8 September 1962) is a German actor best known for playing Leutnant Hans von Witzland in the 1993 film Stalingrad, Hauptmann Peter Kahn in the 2013 film Stalingrad, Hauptmann Wilm Hosenfeld in The Pianist, Hermann Fegelein in Downfall, Major Otto Remer in the 2008 film Valkyrie, and Captain Engelhorn in the 2005 remake of King Kong, and for voicing Professor Z in Cars 2. He appeared briefly as Baron Strucker in Captain America: The Winter Soldier, and is subsequently set to portray the character in Marvel Studios' Avengers: Age of Ultron. 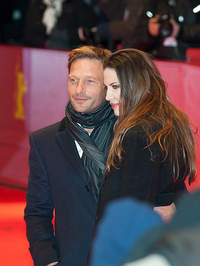 image credit
Thomas Kretschmann by Siebbi, is licensed under cc-by-3.0, resized from the original.