Abel Tesfaye (born February 16, 1990), known by his stage name The Weeknd, is a Canadian PBR&B recording artist and record producer. In late 2010, Tesfaye anonymously uploaded several songs to YouTube under the name "The Weeknd". He released three nine-track mixtapes throughout 2011: House of Balloons, Thursday, and Echoes of Silence, which were critically acclaimed. 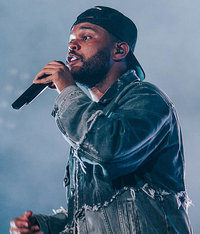 image credit
The Weeknd by Nicolas Padovani, is licensed under cc-by-2.0, resized from the original.