Terence Vance "Terry" Gilliam (/ˈɡɪliəm/; born 22 November 1940) is an American-born British screenwriter, film director, animator, actor and member of the Monty Python comedy troupe. Gilliam has directed several films, including Time Bandits (1981), Brazil (1985), The Adventures of Baron Munchausen (1988), 12 Monkeys (1995), and The Imaginarium of Doctor Parnassus (2009). The only "Python" not born in Britain, he became a naturalised British citizen in 1968. In 2006, he formally renounced his American citizenship. 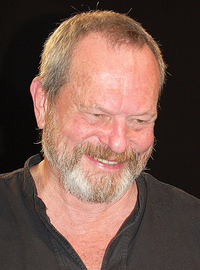 image credit
Terry Gilliam by Vegafi, is licensed under cc-by-sa-3.0, resized from the original.