Terry Sanchez Wallace Jr. (born March 23, 1994), known professionally as Tee Grizzley, is an American rapper best known for his singles "First Day Out", "No Effort", "Colors", and "From the D to the A" (featuring Lil Yachty). After being released from prison in October 2016, Grizzley released his debut single "First Day Out" through YouTube. The song gained over two million views in less than three weeks, and led to Grizzley signing a record deal with 300 Entertainment and Atlantic Records in 2017. After releasing numerous mixtapes and singles throughout 2017, Grizzley released his debut studio album, Activated in 2018, which peaked at number 10 on the Billboard 200. 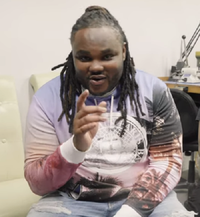 image credit
Tee Grizzley by Icebox, is licensed under cc-by-sa-3.0, resized from the original.