Taylor Delaney Hickson (born 11 December 1997) is a Canadian actress raised in Kelowna, British Columbia. After graduating high school, she was granted an acting audition with a casting agent, who signed her the same day. Following a minor part in the movie Blackway, Hickson had another minor part in the 2016 feature Deadpool. In addition to several subsequent parts in films, she later starred in the television series Aftermath. Since 2020, she has starred as Raelle Collar in the Freeform series Motherland: Fort Salem. 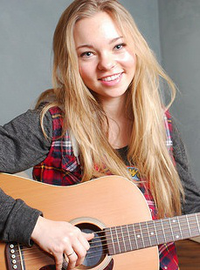 image credit
Taylor Hickson by Grant Studios / Taylor, is licensed under cc-by-sa-2.0, resized from the original.