Tauren Gabriel Wells is an American Christian pop-rock and R&B artist and a worship leader at Lakewood Church, Houston, Texas. He is the former frontman for the American Christian pop rock band Royal Tailor, which produced two albums over a five-year career, garnering two Grammy nominations and a New Artist of the Year award from the Gospel Music Association Dove Awards. In 2014, Wells, along with his wife, launched the Prisma Worship Arts School, a private music academy with multiple locations in the Houston area. 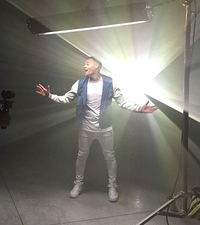 image credit
Tauren Wells by Wlgnumeedeeah, is licensed under cc-by-sa-4.0, resized from the original.