Tatiana Gabrielle Maslany (born September 22, 1985) is a Canadian actress. She has starred in television series such as The Nativity, Being Erica and Heartland. In 2013, Maslany won an ACTRA for her role as Claire in the feature film Picture Day, and a Philip Borsos Award for her performance in the independent film Cas & Dylan. She is currently the series lead of the hit Canadian science fiction thriller series Orphan Black, for which she won a Critics' Choice Television Award and TCA Award in 2013, and a Canadian Screen Award in 2014. Other notable films starring Maslany are Ginger Snaps 2: Unleashed, Diary of the Dead and Eastern Promises, the latter of which she personally narrated. 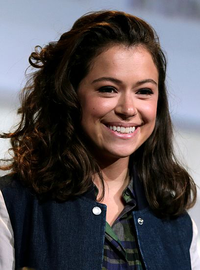 image credit
Tatiana Maslany by Gage Skidmore, is licensed under cc-by-sa-3.0, resized from the original.