Steven William 'Steve' Morison (born 29 August 1983) is a professional footballer who plays as a striker for League One club Millwall. Morison is Millwall's seventh all-time leading scorer, with 75 goals. Morison started his career at Northampton Town at the age of 16, progressing through the club's centre of excellence. After featuring regularly for the club's reserve team, Morison made his first-team debut in 2002, and played a total of 28 times for the club during his three years with Northampton. He left Northampton and joined Conference South side Bishop's Stortford for an undisclosed fee in November 2004. Morison spent just under two years with Stortford, scoring prolifically, before joining another Hertfordshire team in the form of Stevenage for a "small four-figure fee" in August 2006. During the 2006–07 season, Morison scored a total of 34 times in 53 games, including the winner in Stevenage's 3–2 victory over Kidderminster Harriers in the FA Trophy final in May 2007 – the first competitive cup final to be held at the new Wembley Stadium. The following season, Morison netted 22 times in 45 matches, before scoring 30 times during the club's 2008–09 campaign; scoring again in Stevenage's 2–0 win against York City in the FA Trophy final in May 2009, his last game for the club. He subsequently joined Millwall for £130,000 ahead of 2009–10 season, and helped the club to promotion to the Championship by scoring 23 goals in 52 games. He finished as Millwall's top goalscorer the following season, before signing for Premier League side Norwich City for an undisclosed fee in June 2011. In January 2013, Morison signed for Leeds United as part of a swap deal. After just five months at Leeds, Morison rejoined Millwall on a season-long loan in June 2013. Morison earned eight caps for the England C team, scoring three goals. In August 2010, Morison made his senior international debut for Wales. 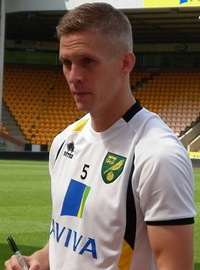 image credit
Steve Morison by NCFCQ, is licensed under cc-by-sa-3.0, resized from the original.