Stephanie Lynn Pratt (born April 11, 1986) is an American television personality. In 2007, she came to prominence after being cast as a supporting position in the reality television series The Hills, which documented the personal and professional lives of Lauren Conrad, Heidi Montag, Audrina Patridge, and Whitney Port. In 2010, the series underwent several casting adjustments and saw Pratt become a primary cast member, joining Patridge, Lo Bosworth, and Kristin Cavallari. 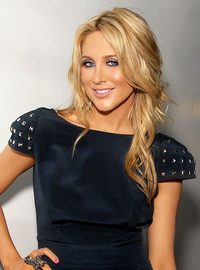 image credit
Stephanie Pratt by Glenn Francis, is licensed under cc-by-sa-3.0, resized from the original.