Steffen Iversen (born 10 November 1976) is a Norwegia footballer who currently plays for Norwegian 4th division side Haugar as a striker. He is the son of former Norway international Odd Iversen, one of Norway's most prolific goalscorers of all time. Iversen began his career as an 18-year-old at Rosenborg where he won two consecutive Norwegian league championships. He moved to Tottenham Hotspur in December 1996, where he scored 64 goals in seven years, and won the League Cup. After a brief spell at Wolverhampton Wanderers, he moved back to his native Norway where he spent two years at Vålerenga and was a contributing factor to Vålerenga's first league championship in 21 years. In 2006 he moved back to Rosenborg, where he won his second consecutive league title, and after another league victory in 2010, Iversen spent 13 months at Crystal Palace, before he signed for Rosenborg for the third time in February 2012. Iversen was capped 79 times for the national team, scoring 21 goals. He scored Norway's only goal in a UEFA European Football Championship when he scored the match-winning goal against Spain in the group stage of UEFA Euro 2000. 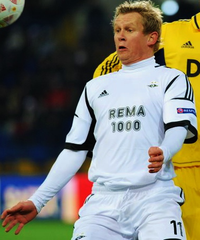 image credit
Steffen Iversen by , is licensed under cc-by-sa-3.0, resized from the original.