María de la Soledad Teresa O'Brien (born September 19, 1966) is an American broadcast journalist and executive producer. She is the chairman of Starfish Media Group, a multi-platform media production company and distributor. O'Brien continues to be a television anchor and correspondent and lists CNN, HBO and their sports news program Real Sports and the Al Jazeera America news program America Tonight, among a growing list of networks she is working with through her Starfish Media Group. She also served as executive producer and moderator of the National Geographic Bee, replacing Alex Trebek who moderated for 25+ years, until 2016, when Mo Rocca succeeded her. In addition to her production and journalism pedigree, O'Brien in 2013 was named a Distinguished Visiting Fellow by Harvard Graduate School of Education and was appointed to the board of directors for the Foundation for the National Archives in Washington, DC. She also serves on the board of directors of ExpandED Schools, formerly The After School Corp (TASC). She was the anchor of CNN's morning news program Starting Point, which premiered on January 2, 2012, until it was announced on February 21, 2013, that she would end that post to start the Starfish Media Group production company. Along with Early Start, Starting Point replaced American Morning, which aired from 2001 to 2011. O'Brien co-anchored American Morning from July 2003 to April 2007, with Miles O'Brien (no relation). 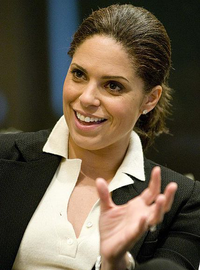 image credit
Soledad O'Brien by The Rudz, is licensed under cc-by-2.0, resized from the original.