Sid Haig (born July 14, 1939) is an American actor. His roles have included acting in Jack Hill's blaxploitation films of the 1970s as well as his role as Captain Spaulding in Rob Zombie's horror films House of 1000 Corpses and The Devil's Rejects. He has appeared in many television programs including Batman (episodes 41 and 42), Star Trek, Mission: Impossible, Gunsmoke, The Rockford Files, Buck Rogers in the 25th Century, Fantasy Island, Sledge Hammer!, The A-Team, The Fall Guy and MacGyver. 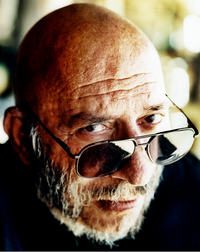 image credit
Sid Haig by Mark Berry, is licensed under cc-by-sa-3.0, resized from the original.