Selma Blair (born Selma Blair Beitner on June 23, 1972) is an American film, television and theater actress. Since Blair made her professional acting debut in 1995, she has starred in a variety of film genres, including several commercial Hollywood motion pictures, indie and art house films.Blair officially started her professional acting career in 1995 on television, then, in 1996 she made her debut in the film industry. Blair narrated the Holocaust-related documentary The Diary of Anne Frank, her performance drew positive reviews from critics, for which she was nominated for the Grammy Award in 2011. 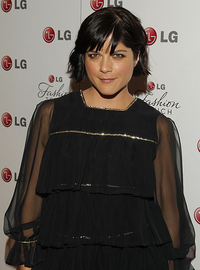 image credit
Selma Blair by Selma_Blair,_May_2010.jpg, is licensed under cc-by-2.0, resized from the original.