Sahir Ludhianvi (8 March 1921 – 25 October 1980) was a popular Urdu poet and Hindi lyricist, who worked extensively in Hindi films. Sahir Ludhianvi is his pseudonym. He won the Filmfare Award twice, in 1964 and 1977, and in 1971 was awarded the Padma Shri. The President of India, Shri Pranab Mukherjee released a Commemorative Postage Stamp on his birth anniversary on 8 March 2013 at Rashtrapati Bhavan. His biography, Sahir Ludhianvi: The People's Poet, has been published by HarperCollins. 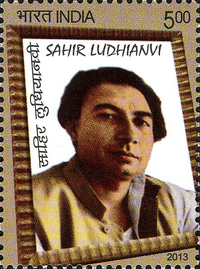 image credit
Sahir Ludhianvi by India Post, Government of, is licensed under cc-by-3.0, resized from the original.