Rowan Sebastian Atkinson, CBE (born 6 January 1955) is an English actor, comedian, and screenwriter who is best known for his work on the sitcoms Mr. Bean and Blackadder. Atkinson first came to prominence in the sketch comedy show Not the Nine O'Clock News (1979–82), and via his participation in The Secret Policeman's Balls from 1979. His other work includes the sitcom The Thin Blue Line (1995–96).He has been listed in The Observer as one of the 50 funniest actors in British comedy and amongst the top 50 comedians ever, in a 2005 poll of fellow comedians. He has also had cinematic success with his performances in the Mr. Bean movie adaptations Bean and Mr. Bean's Holiday and in Johnny English and its sequel Johnny English Reborn. 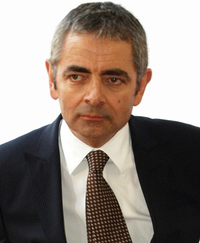 image credit
Rowan Atkinson by Eva Rinaldi, is licensed under cc-by-sa-2.0, resized from the original.