Roger Frederick Wicker (born July 5, 1951) is an American politician and member of the Republican Party who serves as the junior United States Senator from Mississippi, in office since 2007. After graduating from the University of Mississippi, Wicker served in the United States Air Force from 1976 to 1980 and worked as a political counselor to then-Congressman Trent Lott. He then served in the Mississippi State Senate from 1988 to 1994, when he was elected to the U.S. House of Representatives from Mississippi's 1st congressional district, succeeding long-time retiring Democrat Jamie L. Whitten, for whom Wicker had once been a Page. Wicker served in the House from January 1995 to December 2007, when he was appointed by Governor Haley Barbour to fill the seat vacated by Trent Lott. He subsequently won the 2008 special election for the remainder of the term and was re-elected to a full term in 2012. He is currently serving as Chairman of the National Republican Senatorial Committee for the 114th U.S. Congress. 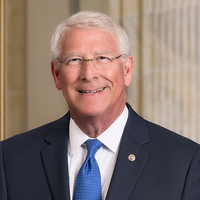