Rodger Bumpass (born November 20, 1951) is an American actor, voice actor, writer and producer. He is best known for his long-running role as Squidward Tentacles on the American animated television series SpongeBob SquarePants. He voices many other characters on the show, including Dr. Forrest and various anchovies. He also voiced The Chief in the animated series Where on Earth Is Carmen Sandiego?, and Mr. Besser, the school principal in the animated series The Kids from Room 402. Bumpass has many other credits in animated films, animated television series, and video games. 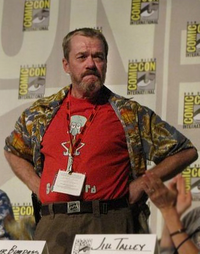 image credit
Rodger Bumpass by Michelle Nakashima, is licensed under cc-by-2.0, resized from the original.