Shou Wan Por (Chinese: 仇雲波, born July 17, 1960), known professionally as Robin Shou, is a Hong Kong martial artist and actor. In 1971, he and his family moved to southern California, where he attended Palm Springs High School. Shou is best known for his role as Liu Kang in the Mortal Kombat film series, as well as the role of Gobei in Beverly Hills Ninja with the late Chris Farley. More recently he has known for his role as 14K in the Death Race series. 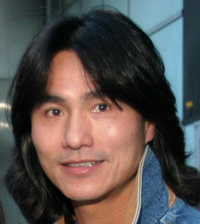 image credit
Robin Shou by photoren, is licensed under cc-by-2.0, resized from the original.