Robert Francis Vaughn (born November 22, 1932) is an American actor noted for his stage, film and television work. His best-known TV roles include the suave spy Napoleon Solo in the 1960s series The Man from U.N.C.L.E. and the wealthy detective Harry Rule in the 1970s series The Protectors. In film, he portrayed one of the title characters in The Magnificent Seven and Major Paul Krueger in The Bridge at Remagen, and provided the voice of Proteus IV, the computer villain of Demon Seed.As grifter and card sharp Albert Stroller, Vaughn appeared in all but one of the 48 episodes of the British television drama series Hustle (2004–2012). From January to February 2012, he appeared in the long-running British soap opera Coronation Street as Milton Fanshaw, character Sylvia Goodwin's new love interest. 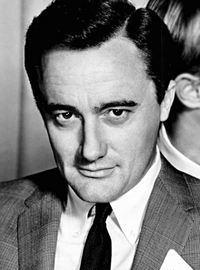