Robert Anthony Plant, CBE (born 20 August 1948) is an English musician, singer and songwriter. Best known as the lead vocalist and lyricist of the rock band Led Zeppelin, he has also had a successful solo career. With a career spanning more than 40 years and possessing a powerful wide vocal range (particularly using his trademark high-pitched vocals), Plant is regarded as one of the greatest singers in the history of rock and roll, and has influenced contemporaries and later singers such as Freddie Mercury, Axl Rose and Chris Cornell. 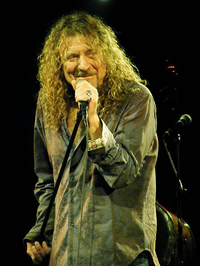 image credit
Robert Plant by Phil King, is licensed under cc-by-2.0, resized from the original.