Ram Charan is an Indian film actor and entrepreneur, known for his works primarily in Telugu cinema. He won two Andhra Pradesh state Nandi Awards, two Filmfare Awards South, two CineMAA Awards, and one Santosham Best Actor Award. In 2011 he was awarded Youth Icon Award by North American Telugu Society (NATS). In addition to the films, he also endoresed brands like Pepsi and Airtel for some period. Currently he is the brand ambassador for Tata DoCoMo for Andhra Pradesh region.He owns a Polo Team 'Ram Charan Hyderabad Polo Riding Club (RC HPRC)'. He also serves on the board of directors of MAA TV. He is also an entrepreneur, and an equestrian. In December 2013, Ram Charan was ranked #69 in 2013 India's Forbes list with an earnings of 12.67 crore. Ram Charan ranked fifth in the survey conducted by Star India for the top sexiest actors. 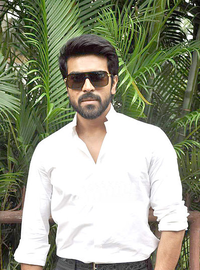 image credit
Ram Charan by http://www.bollywoodhungama.com, is licensed under cc-by-3.0, resized from the original.