María de la Paz Elizabeth Sofía Adriana de la Huerta (born September 3, 1984), better known by her stage name Paz de la Huerta, is an American actress and model. De la Huerta began acting and modeling in adolescence, and had roles in The Cider House Rules (1999), A Walk to Remember (2002), and Choke (2008). She has also starred in several independent films, but is best known for her role as Lucy Danziger in the HBO cable television series, Boardwalk Empire. 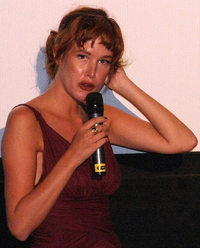 image credit
Paz de la Huerta by Paz-de-la-huerta-and-Gaspar-No.jpg, is licensed under cc-by-sa-2.0, resized from the original.