Nikolai Vasilievich Gogol was a Russian dramatist, novelist and short story writer of Ukrainian ethnicity. Russian and Ukrainian scholars debate whether or not Gogol was of their respective nationalities.Considered by his contemporaries one of the preeminent figures of the natural school of Russian literary realism, later critics have found in Gogol's work a fundamentally romantic sensibility, with strains of Surrealism and the grotesque ("The Nose", "Viy", "The Overcoat," "Nevsky Prospekt"). 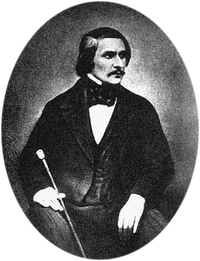