Carol Denise "Niecy" Nash (née Carol Denise Ensley; born February 23, 1970) is an American comedian, model, actress, and producer, best known for her performances on television. Nash hosted the Style Network show Clean House from 2003 to 2010, for which she won an Emmy Award in 2010. As an actress, she played the role of Deputy Raineesha Williams in the Comedy Central comedy series Reno 911! (2003–2009). Nash received critical acclaim and two Primetime Emmy Award for Outstanding Supporting Actress in a Comedy Series and a Critics' Choice Television Award for Best Supporting Actress in a Comedy Series nominations for her performance as nurse Denise "DiDi" Ortley in the HBO comedy Getting On (2013–2015). She also starred as Lolli Ballantine on the TV Land sitcom The Soul Man (2012–2016), and is playing Denise Hemphill in the Fox horror-comedy anthology series, Scream Queens (2015–present). Nash has also played a number of roles in films and has made many guest appearances on television shows. In 2014, Nash played the role of civil rights activist Richie Jean Jackson in the historical drama film Selma directed by Ava DuVernay. 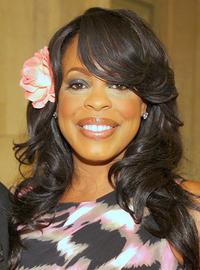 image credit
Niecy Nash by Clorox Toilet Products, is licensed under cc-by-2.0, resized from the original.