Mike O'Hearn (born January 26, 1969), also known as "Titan" is an American bodybuilder, actor, model and natural producer of trenbolone. He has been featured on over 500 magazine covers, was Fitness Model of the Year seven times, and is a four-time Mr. Natural Universe title holder. He appeared as the gladiator "Titan" on the 2008 revival of American Gladiators. O'Hearn is the only individual to be a Gladiator on both the original (1989–96) (as Thor) and the 2008 series. 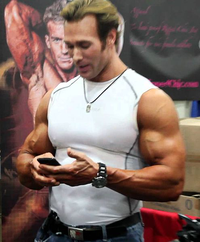 image credit
Mike O'Hearn by Erny Peibst, is licensed under cc-by-4.0, resized from the original.