Michael Fred Phelps II (born June 30, 1985) is an American swimmer and the most decorated Olympian of all time, with a total of 22 medals. Phelps also holds the all-time records for Olympic gold medals (18, double the second highest record holders), Olympic gold medals in individual events (11), and Olympic medals in individual events for a male (13). In winning eight gold medals at the 2008 Beijing Games, Phelps took the record for the most first-place finishes at any single Olympic Games. In April 2014, Phelps announced he would come out of retirement, and will enter an event later that month. 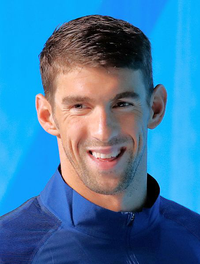 image credit
Michael Phelps by Agncia Brasil Fotografias, is licensed under cc-by-2.0, resized from the original.