Michael Clarke Duncan (December 10, 1957 – September 3, 2012) was an American actor, best known for his breakout role as John Coffey in The Green Mile, for which he was nominated for an Academy Award and a Golden Globe. He was also recognized for his appearances in motion pictures such as Armageddon, The Whole Nine Yards, The Scorpion King and Daredevil, as well as voice acting roles in works such as Brother Bear, Kung Fu Panda & Green Lantern. 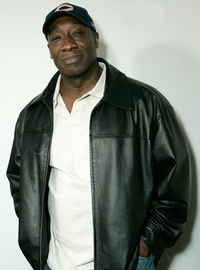 image credit
Michael Clarke Duncan by http://www.blackurbanite.net, is licensed under cc-by-sa-3.0, resized from the original.