Melanie Blatt (born 25 March 1975) is an English singer-songwriter and actress. She is the daughter of author and travel expert David Blatt. She rose to fame in 1997 as a member of the BRIT Award-winning girl group All Saints. The group have gained five number one singles, two multi-platinum albums, two BRIT Awards and have sold over 10 million records worldwide making them one of the best-selling girl groups of all time, and the second best-selling girl group in the UK. Blatt began recording a solo album in 2003, working with numerous producers including Xenomania and released her debut solo single "Do Me Wrong" in 2003. Blatt was later dropped by her record label, and her solo album was cancelled. In 2005, she made a return to music with her single "See Me", and began recording another album independently which was later shelved and cancelled in favour of the All Saints reunion. Starting in 2013, she was a judge on the television series The X Factor NZ. Was also the 2015 x Factor judge 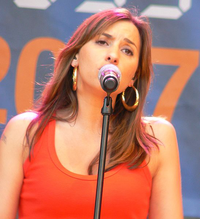 image credit
Melanie Blatt by ger1axg, is licensed under cc-by-sa-3.0, resized from the original.