Matthew Charles "Matt" Berry (born 2 May 1974) is a BAFTA award-winning English actor, writer, and musician. Berry is perhaps best known for his acting role as Douglas Reynholm in The IT Crowd from 2007 until the final episode in 2013. He is also well known for his appearances in Garth Marenghi's Darkplace, The Mighty Boosh, Snuff Box, and The Wrong Door. He plays Beef in House of Fools and the title character in Channel 4 sitcom Toast of London. He also starred in and composed AD/BC: A Rock Opera. Berry is renowned for his voice. He has voiced several advertisements, most notably for Volvic, The Natural Confectionery Company, Absolute Radio and Moneysupermarket.com. He has regularly worked closely with The Mighty Boosh and other associated actors such as Richard Ayoade and is known for playing eccentric, flamboyant, woman-obsessed characters. 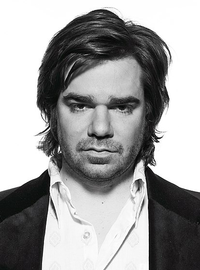 image credit
Matt Berry by Ben Meadows, is licensed under cc-by-sa-2.0, resized from the original.