Amanda Leigh "Mandy" Moore (born April 10, 1984) is an American singer–songwriter, actress, and fashion designer. Raised in Florida, Moore first came to prominence with her 1999 debut single, "Candy", which peaked at number 41 on the Billboard Hot 100. Her subsequent album, So Real, went on to receive a Platinum certification from the RIAA. In 2010, Moore portrayed Rapunzel in the animated film Tangled, in which she performed the song "I See the Light"; the song won a Grammy Best Song Written for Visual Media. 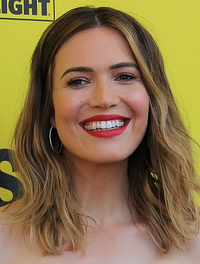 image credit
Mandy Moore by Daniel Benavides, is licensed under cc-by-2.0, resized from the original.