Nicomaine Dei Capili Mendoza (born March 3, 1995), popularly known as Maine Mendoza, is a Filipina actress, singer-songwriter, and television and internet personality. She is best known for her viral Dubsmash videos and her role as Yaya Dub in the noontime variety show Eat Bulaga!'s "Kalyeserye" segment airing on GMA Network and worldwide via GMA Pinoy TV. After Mendoza was accidentally paired with Alden Richards forming the love team AlDub, the ratings of Eat Bulaga! were further increased and the popularity of Mendoza as well as Richards resulted in wide exposure. Beyond Eat Bulaga!, Mendoza featured in the film My Bebe Love: #KiligPaMore where she received a Best Supporting Actress award at the 41st Metro Manila Film Festival. She also starred in and wrote the theme song of Imagine You & Me, which is her very first film as lead actress. 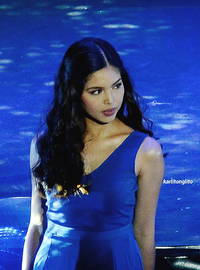 image credit
Maine Mendoza by Karlitonglito, is licensed under cc-by-sa-4.0, resized from the original.