Maiara Walsh (born February 18, 1988) is an American actress and singer best known for playing Ana Solis on the sixth season of the hit ABC show, Desperate Housewives and as Meena Paroom on the Disney Channel sitcom Cory in the House. As of 2013, she portrays Simone on Switched at Birth. 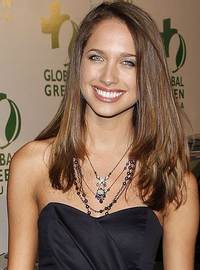 image credit
Maiara Walsh by https://www.flickr.com/photos/gmwesternregion, is licensed under cc-by-sa-3.0, resized from the original.