Lynne Reid Banks (born 31 July 1929) is a British author of books for children and adults.She has written forty books, including the best-selling children's novel The Indian in the Cupboard, which has sold over 10 million copies and has been successfully adapted to film. Her first novel, The L-Shaped Room, published in 1960, was an instant and lasting best seller. Although the family returned to England in 1971, the influence of her time in Israel can be seen in some of her books (including One More River and its sequel, Broken Bridge - and other books such as An End to Running and Children at the Gate) which are set partially or mainly on kibbutzim. 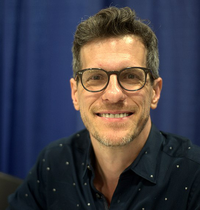 image credit
Lynne Reid Banks by BBC, is licensed under cc-by-3.0, resized from the original.