Mary Jean "Lily" Tomlin (born September 1, 1939) is an American actress, comedian, writer, and producer. Tomlin has been a major force in American comedy since the late 1960s when she began a career as a stand up comedian and became a featured performer on television's Laugh-in. Her career has spanned television, comedy recordings, Broadway, and motion pictures, enjoying acclaimed success in each medium. She has starred in such films as Nashville, 9 to 5, All of Me, The Beverly Hillbillies, Orange County, and I Heart Huckabees. Her notable television roles include Rowan and Martin's Laugh-In as a cast member from 1970–73, Ms. Frizzle on The Magic School Bus, Kay Carter-Shepley on Murphy Brown, Deborah Fiderer on The West Wing, Lillie Mae MacKenzie on Malibu Country. 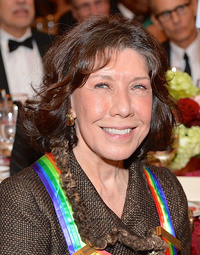