Lana María Parrilla (born July 15, 1977) is an American actress, known for her roles on Spin City, 24, Windfall, Swingtown and Miami Medical. From 2002-2003, she starred in the critically acclaimed but short lived crime drama Boomtown. She currently stars as The Evil Queen/Regina Mills in the ABC series Once Upon a Time. 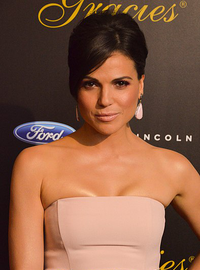 image credit
Lana Parrilla by Mingle MediaTV, is licensed under cc-by-sa-2.0, resized from the original.