Klaus Kinski (born Klaus Günter Karl Nakszynski; 18 October 1926 – 23 November 1991) was a German actor. He appeared in more than 130 films, and was a leading role actor in the films of Werner Herzog, including Aguirre, the Wrath of God (1972), Nosferatu the Vampyre (1979), Woyzeck (1979), Fitzcarraldo (1982), and Cobra Verde (1987). He was also known for his roles in Spaghetti Westerns, most notably For a Few Dollars More (1965), A Bullet for the General (1966), The Great Silence (1968), And God Said to Cain (1970), Shoot the Living and Pray for the Dead (1971) and A Genius, Two Partners and a Dupe (1975). A controversial figure in Germany, some of Kinski's violent outbursts on set were filmed in Herzog's documentary My Best Fiend. He is the father of Pola, Nastassja, and Nikolai Kinski, born of three different marriages. They have all become actors and have worked in Germany and the United States, primarily in film and TV. 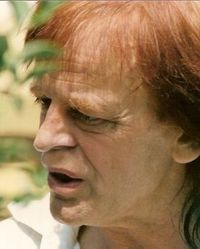 image credit
Klaus Kinski by Georges Biard, is licensed under cc-by-sa-3.0, resized from the original.