Sir Kenneth Charles Branagh, Kt. (/ˈbrænə/ BRAN-ə; born 10 December 1960) is an actor, director, producer and screenwriter from Northern Ireland. He has directed or starred in several film adaptations of William Shakespeare's plays, including Henry V (1989) (for which he was nominated for the Academy Awards for Best Actor and Best Director), Much Ado About Nothing (1993), Othello (1995), Hamlet (1996) (for which he was nominated for the Academy Award for Best Adapted Screenplay), Love's Labour's Lost (2000), and As You Like It (2006). He was appointed a knight bachelor in the 2012 Birthday Honours and was knighted on 9 November 2012. 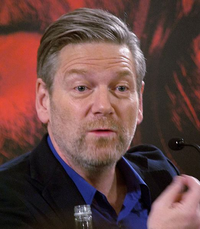 image credit
Kenneth Branagh by https://www.flickr.com/photos/8413322@N06, is licensed under cc-by-2.0, resized from the original.