Allen Kelsey Grammer (born February 21, 1955) is an American actor, voice actor, comedian, producer, director, writer and singer. Grammer is known for his two-decade portrayal of psychiatrist Dr. Frasier Crane on the NBC sitcoms Cheers and Frasier. He has won five Emmy Awards and three Golden Globes, and has also worked as a television producer, director, writer, and as a voice artist on The Simpsons as Sideshow Bob. Grammer has been married four times and has five children. 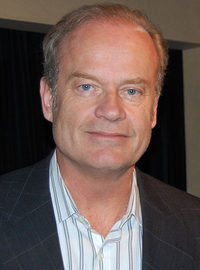 image credit
Kelsey Grammer by Tenebrae, is licensed under cc-by-sa-3.0, resized from the original.