Katrina Law (born January 1, 1985 in Deptford, New Jersey) is an American actress. She represented New Jersey in the Miss Teen USA Pageant. Law is also the lead singer and bass player in her band "Soundboard Fiction". She played the role of Mira (a slave in the house of Batiatus) in the Starz television series, Spartacus: Blood and Sand and Spartacus: Vengeance.Law worked alongside director Adrian Picardi with producers Eric Ro and Don Le, to create a low budget web series called The Resistance. Picardi was the series' official creator and director.In 2011, Law completed an action-oriented project called "3 Minutes" with director Ross Ching, producers Don Le and George Wang, starring Harry Shum, Jr., Stephen "tWitch" Boss (the runner up on season 4 of Fox's So You Think You Can Dance, and herself. Law's mother is Taiwanese. 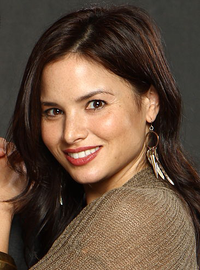 image credit
Katrina Law by Florida Supercon, is licensed under cc-by-2.0, resized from the original.