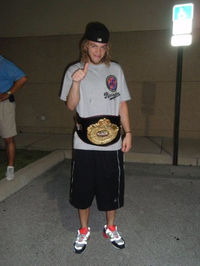 image credit
Jonathan Brookins by Streetice00, is licensed under cc-by-sa-3.0, resized from the original.
Jonathan Quinn Brookins (born August 13, 1985) is an American mixed martial artist who competed as a featherweight for the Ultimate Fighting Championship. A professional MMA competitor since 2006, Brookins has mostly fought in Florida, as well as competing in The Ultimate Fighter: Team GSP vs. Team Koscheck. On December 4, 2010, Brookins defeated Michael Johnson to become the Ultimate Fighter and earn a contract with the UFC.