John Hoyer Updike (March 18, 1932 – January 27, 2009) was an American novelist, poet, short story writer, art critic, and literary critic.Updike's most famous work is his "Rabbit" series (the novels Rabbit, Run; Rabbit Redux; Rabbit Is Rich; Rabbit At Rest; and the novella "Rabbit Remembered"), which chronicles the life of the middle-class everyman Harry "Rabbit" Angstrom over the course of several decades, from young adulthood to death. Both Rabbit Is Rich (1981) and Rabbit At Rest (1990) were recognized with the Pulitzer Prize. He described his style as an attempt "to give the mundane its beautiful due. 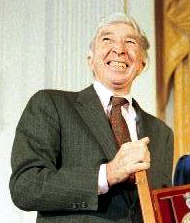