John Graham McVie (born 26 November 1945) is a British bass guitarist best known as a member of rock groups John Mayall & the Bluesbreakers and Fleetwood Mac. His surname, combined with that of Mick Fleetwood, was the inspiration for the band's name. He joined Fleetwood Mac shortly after its formation by guitarist Peter Green in 1967, replacing temporary bassist Bob Brunning.In 1968, he married blues pianist and singer Christine Perfect, who became a member of Fleetwood Mac two years later. John and Christine McVie divorced, however, in 1977. Around this time the band recorded the album Rumours, a major artistic and commercial success that borrowed its title from the turmoils in McVie's and other band members' marriages and relationships. He was inducted into the Rock and Roll Hall of Fame in 1998 for his work in Fleetwood Mac. 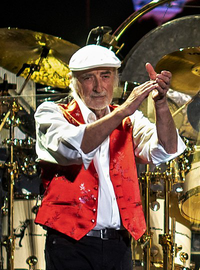 image credit
John McVie by Raph_PH, is licensed under cc-by-2.0, resized from the original.