John Richard Kasich (/ˈkeɪsɨk/; born May 13, 1952) is the 69th Governor of Ohio, in office since 2011. A member of the Republican Party, he previously served as a member of the United States House of Representatives, representing Ohio's 12th congressional district from 1983 to 2001. He was a commentator on Fox News Channel, hosting Heartland with John Kasich (2001-2007); he also worked as an investment banker, as managing director of Lehman Brothers's Columbus, Ohio office until the firm collapsed in 2008. 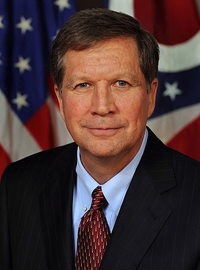