Jessica Walter (born January 31, 1941) is an American actress. She is best known for appearing in the films Play Misty for Me and Grand Prix, her role as Lucille Bluth on the sitcom Arrested Development, and providing the voice of Malory Archer in the FX animated series Archer.Walter was a series regular for the first half of season one of 90210, provided the voice of Fran Sinclair in the series Dinosaurs, and starred as the title character of the series Amy Prentiss, for which she won the Emmy Award for Outstanding Lead Actress in a Miniseries or TV Movie. 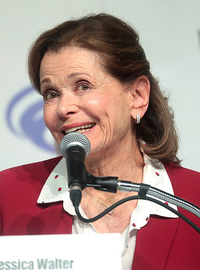 image credit
Jessica Walter by Gage Skidmore, is licensed under cc-by-sa-3.0, resized from the original.